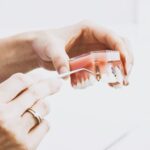 Marfan’s syndrome (MFS) is a systemic disorder of connective tissue caused by mutations in the
extracellular matrix protein fibrillin-1. Orofacial characteristics may be useful in identification of the syndrome. Severe periodontitis is sometimes observed in MFS patients, but no in-depth information has been reported in Italian groups of growing subjects with MFS. The aim of this study was to analyze the periodontal condition on a group of growing subjects affected by MFS, in comparison with a typically developed control group. A group of 16 subjects with diagnosed MFS were recruited from the Centre for Rare Diseases for Marfan Syndrome and Related Disorders of Tor Vergata University Hospital. The Marfan Group (MG) was compared with a Control Group (CG) composed by 20 nonsyndromic subjects. The periodontal clinical parameters like Marginal Gingival Thickness (GT), Plaque Index (PI), Bleeding On Probing (BOP) and Modified Periodontal Screening and Recording (PSR) were assessed. Patients with Marfan syndrome reveal a higher presence of plaque and consequently a generalized inflammation in the oral cavity when compared with a control group. For more information click here.

Eidikology: proposition for a new terminology for the science of rare diseases