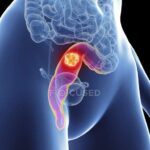 Congenital XI factor deficiency is a rare disease caused by autosomal recessive inheritance. Clinically, there are few spontaneous hemorrhages, which can cause abnormal bleeding after trauma, surgery, and tooth extraction. We experienced a colon cancer patient with congenital XI factor deficiency who was successfully treated by laparoscopic approach with the administration of the preoperative fresh frozen plasma (FFP). The patient was an 82-year-old woman who complained of right lower abdominal pain for ap eriod of 2 months with no previous history of abnormal hemostasis. She received colonoscopy and was diagnosed with ascending colon cancer. Preoperative blood tests resulted in prolongation of activated partial thromboplastin time (APTT). After further investigation, factor XI (FXI) activity was found to be abnormal at 3.0% and congenital FXI deficiency was diagnosed. By replenishing FXI by FFP, APTT was improved to 37 s so perioperative abnormal bleeding could be avoided and an operation for ascending colon cancer performed. The patient received laparoscopic ileocolic resection and was discharged on a postoperative day 7 uneventfully. It is important to detect coagulation disorders such as FXI deficiency during routine preoperative checkups, and it is also important to consider unrecognized coagulation disorders if we encounter unexplained abnormal bleeding after surgery or trauma. In patients who have already been diagnosed with FXI deficiency, appropriate treatment including administration of FFP should be considered before surgery, and laparoscopic approach has a possibility to bring safety outcomes as an effect of the reduction of the intraoperative bleeding. For more information click here.