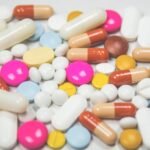 Satoyoshi syndrome is a multisystemic rare disease of unknown etiology, although an autoimmune basis is presumed. Its main symptoms are: painful muscle spasms, diarrhea, alopecia and skeletal abnormalities. Clinical course without treatment may result in serious disability or death. A review of treatment and its response is still pending. Sixty-four cases of Satoyoshi syndrome were published between 1967 and 2018. 47 cases described the treatment administered. Drugs used can be divided into two main groups of treatment: muscle relaxants/anticonvulsants, and corticosteroids/immunosuppressants. Dantrolene improved muscle symptoms in 13 out of 15 cases, but not any other symptoms of the disease. Other muscle relaxants or anticonvulsant drugs showed little or no effect. 28 out of 30 cases responded to a regimen that included costicosteroids. Other immunosuppressive drugs including cyclosporine, mycophenolate mofetil, azathioprine, methotrexate, tacrolimus and cyclophosphamide were used to decrease corticosteroid dose or improve efficacy. Immunoglobulin therapy was used in nine patients and four of them obtained a favorable response. Corticosteroids was the most widely treatment employed with the best results in Satoyoshi syndrome. Further studies are needed to determine optimal dose and duration of corticosteroids as well as the role of other immunosuppressants and immunoglobulin therapy. Genetic or autoimmune markers will be useful to guide future therapies. For more information click here.