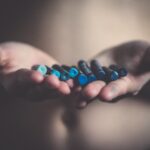 Angiodysplastic (AD) lesion is the most common cause of recurrent gastrointestinal (GI) bleeding in inherited Von Willebrand disease (VWD) patients lacking high-molecular-weight multimers. Defect or dysfunction of von Willebrand factor (VWF) may lead to enhanced endothelial cell proliferation followed by the development of neoangiogenesis and vascular malformation, which result in severe bleeding. Recurrent bleeding causing by GI AD is a challenging complication of VWD. The management of VWD could be difficult due to frequent recurrence and severity of bleeding episodes. The primary aim of management is not only to stop but also to prevent bleeding. We present two patients of type 3 VWD associated with AD and severe GI bleeding, which were successfully treated by endoscopic coagulation and prophylactic therapy with different regimens of plasma-derived VWF/factor VIII (pdVWF/FVIII) concentrate to maintain a trough level in the patient unresponsive to standard treatment. For more information click here.

Self-help for improving the quality of life of...