Is air pollution affecting the disease activity in patients with systemic lupus erythematosus? 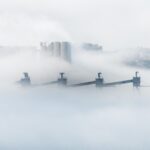 It has been documented that several major components of air pollution, including trace elements and polycyclic aromatic hydrocarbons, are associated with the prevalence of systemic lupus erythematosus (SLE). However, the impact of air pollution on the SLE disease activity is still elusive. In this paper, we review the current evidence investigating the link between air pollution, especially when measured as PM2.5, and SLE severity and activity. Current evidence suggests that variations in air pollution may influence the disease activity in patients with SLE. However, the sample size, methodological biases, and differences across the studies make further research mandatory. Understanding the increased burden of SLE and its complications, not only from a medical, but also from a socio-demographic perspective, including an exposure to pollutants, should have implications for resource allocation and access to subspecialty care. For more information click here.