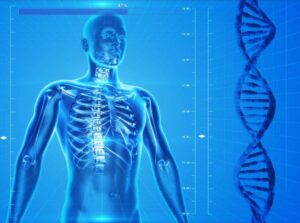 Central hypoventilation syndrome (or Ondine–Hirschprung disease) is a rare autosomal dominant disease caused by heterozygous mutation in the PHOX2B gene on chromosome 4p13. It is characterized by a deficiency in autonomic control of respiration, which results in inadequate or ventilatory responses to hypercapnia and hypoxemia.Authors present a 4 years and 3 months boy monitored from birth. In the early neonatal period the neurological symptoms were respiratory pauses and apnea, muscle hypotonia, neonatal seizures. Magnetic resonance imaging of head showed periventricular and intraventricular hemorragies, periventricular leukomalacia. Complementary were found respiratory distress syndrome, bilateral nephrocalcinosis, secondary defect type foramen ovale with left-right shunt, sinus arythmia with often sinus pauses, isolated auricular extrasystoles, gastroesophageal reflux, facial dysmorphysm. DNA analysis of the PHOХ2B gene showed heterozygous frameshift mutation of exon 3, duplication18p6, which leads to expansion of 6 alanin residues (26 alanins) in the terminal С-terminal end of the PHOX2B gene.A complex lifesaving therapy was proceeded in the neonatal period. To the age of 3 years the patient was left at home on spontaneous breathing with tracheostoma and ventilation at night. After the removal of the tracheostoma the patient continues noninvasive ventilation at night. Read the whole article here.

Economic modeling in health technology assessment – what is acceptable and what makes sense?