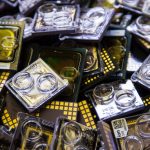 X-linked hypophosphatemia (XLH) is a rare disease characterized by low phosphate levels. Scientific evidence points to a link between hypophosphatemia and obesity in general population. The aim of our longitudinal observational study was to investigate the prevalence of obesity and associated factors in a large cohort of children with XLH. We studied 172 XLH-children 5-20 years of age (113 girls/59 boys). Anthropometric parameters (weight, height, and BMI) were collected at birth and during follow-up at mean ages of 5.3, 8.2, 11.3, and 15.9 years (groups 1, 2, 3, and 4, respectively). In each group, subjects were classified based on International Obesity Taskforce (IOTF) cut off values of BMI for age and sex as overweight or obese (IOTF 25-30 or ≥30 kg/m2, respectively). One out of three of XLH-children have phenotypically unfavourable metabolic profile expressed as increased prevalence of overweight or obesity in comparison to general population. Both the lack of XLH family history and the duration of treatment increase the risk of higher BMI-IOTF. BMI should be carefully monitored in children, and later in adults, with XLH. For more information click here.